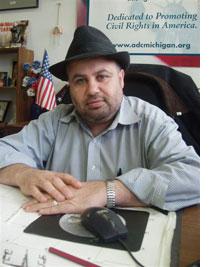 Emotion often gets in the way of achievement in the American Arab community. You can’t seem to have a discussion without everyone screaming, yelling and calling you harsh names. It doesn’t matter whether the topic is Middle East peace, two-states, or sexual harassment involving someone at an institution responsible for fighting for civil rights.

Apart from all of these controversies, there are also the deep political divisions that have carved the American Arab community into incoherent and inconsequential groups.

Last month, Michigan State Rep. Rashida Tlaib came out of the closet to accuse the Midwest Director of the American Arab Anti-Discrimination Committee, Imad Hamad, of sexually harassing her and other women.

It’s a painful battle for many reasons, but most troubling is how some extremists with ulterior motives have joined in, not to defend Tlaib or to oppose sexual harassment, but to destroy ADC, one of the strongest organizations in the American Arab community.

ADC has always been a target of these extremists. First, ADC is more closely aligned with the Gulf Arab countries that have donated to it generously. That’s a problem to the fanatics, most of whom support Syria’s tyrant Bashar Al-Assad.

The assault against Hamad gave them an excuse to urge ADC’s destruction, again. The extremists have transformed the Tlaib-Hamad controversy into a referendum on ADC, rather than a community-wide discussion about the problems of sexual harassment. By the way, sexual harassment is rampant in the American Arab community, especially among the religious fanatics.
I tried to address that point in a recent column, but Tlaib responded with these two public tweets on Twitter:

the investigation was sexual harassment of women in 2011-12. Get ur facts straight. Enough w the conspiracy theories

this is about a sexual predator not internal community politics. You all made it about that instead ofthe victims

Granted, Twitter’s 140-character limit makes it a terrible place to have real discussions, and it often becomes a bully pulpit for fanatics to defame, harass and bully.

No Rashida, I was not making it about politics instead of the victims. I was addressing both, analyzing how the accusations are being exploited by extremists who seek to destroy ADC.

ADC reviewed Tlaib’s charges but concluded that there just wasn’t enough evidence, other than accusations. Naturally, that upset her. The charges date back to 2007 when, Rashida claims, nothing was done. Four years later, more accusations were made, too.

Tlaib revealed she was also victimized 15 years ago, noting she regretted not speaking out publicly. I wish she had spoken out back then. Maybe that might have prevented the alleged incidents that followed. The truth is the American Arab community as a whole, not just ADC, closes its eyes to sexual harassment.

The fanatics don’t care about Tlaib or sexual harassment. Most of them are bullies and discriminate on the basis of religion and race, too. They only care about destroying ADC.

That doesn’t make Tlaib’s claims wrong. It doesn’t make them right, either. Yet Hamad’s reputation was raked over the coals with no chance to defend himself in a scene lifted from the movie “Lord of the Flies.”

I think Tlaib is a role model for our community, someone who has overcome the obstacles that plague the Arab community. She won elected office in a district that has few Arab voters in it. Maybe that’s why she won. Many Arab males won’t vote for a woman candidate for any office.

Tlaib is a moderate. The extremists, whose only qualifications are their ability to scream, yell, and stamp their feet the loudest, and to bully, would have worked against her.

Bullying is a problem in the American Arab community. We lack the institutional support systems that other ethnic minorities have to deal with the burdens of discrimination and victimization. As a consequence, when we are victimized, we do what most victims do and turn on ourselves.

When you can’t beat the problems, you turn on your own community, because it’s easier. It’s called the “Arab Syndrome.” The Arab community has embraced an activism that sometimes is self-destructive, and motivated mostly by jealousy, rivalry and envy.

That doesn’t mean, as Tlaib implies, that I, or others don’t care about the sexual harassment charges. I certainly do. But I think in all fairness that Hamad deserves the right to defend himself.

The same fanatics attacked me when I served on the national ADC board. They fabricated ridiculous accusations and lies. Why? Because I expressed an opinion that Palestinians should accept compromise and stop lying to the refugees, telling them falsely that one day they will be able to return to their homes and lands. I think we should take them out of the squalor of the refugee camps and rebuild their lives in a Palestinian State that is free. They hate me even more because I am Christian, my wife is Jewish, and I oppose the Syrian dictatorship. I am not afraid to speak out against them.

As a result of the accusations, Hamad was suspended from what became, under his leadership, the most successful ADC Chapter in America. Maybe his style was a little rough, sometimes, but what American Arab leader or activist is any better? Hamad had a track record of success.

The issue of sexual harassment should be lifted off of ADC’s shoulders and adjudicated in a court of law. Fairness, not retribution, should be the goal. People are supposed to be innocent until proven guilty.

Ironically, in the post Sept. 11 America, Arabs are guilty until proven innocent. It seems that is also the case in the American Arab community.

– Ray Hanania is an award winning columnist and veteran political writer. He can be reached at http://www.TheMediaOasis.com or follow him on Twitter @RayHanania